BLOCKCHAIN IN PROPERTY (AND THE TROUGH OF DISILLUSIONMENT)

It's time to sell the sizzle.
Not the sausage.

I’m not sure if I’d describe it as cynicism but I am increasingly aware that, occasionally, agents, surveyors, developers and investors are giving the metaphorical rolling of their eyes when the conversation turns to PropTech.

It could be that they are just rolling their eyes at me - but it is a theme that has been picked up in a few articles and reports in recent months. In one written in July, Remit Consulting posed the question: “Have we reached peak PropTech?” and suggested that the market “seems saturated with ‘solutions’ to problems we weren’t sure that we had.”

Remit's article also suggested that: “there appears to also be little correlation between the number of times Blockchain gets mentioned at PropTech events and the number of people who actually know what it means, which further suggests that PropTech is just a fad.”

This mood-swing was echoed in an article in the most recent edition of EG’s Tech magazine (it doesn’t say who wrote it, but I’m guessing Emily Wright) titled “Is the Crypto Craze over?” which talks about the waning interest in cryptocurrencies.

Another report that seems to confirm the slightly (?) cynical attitude towards Blockchain came from Gartner in August when it published its “Hype Cycle for Emerging Technologies, 2018”, which firmly put Blockchain about quarter of the way down the infamous “Trough of Disillusionment.” 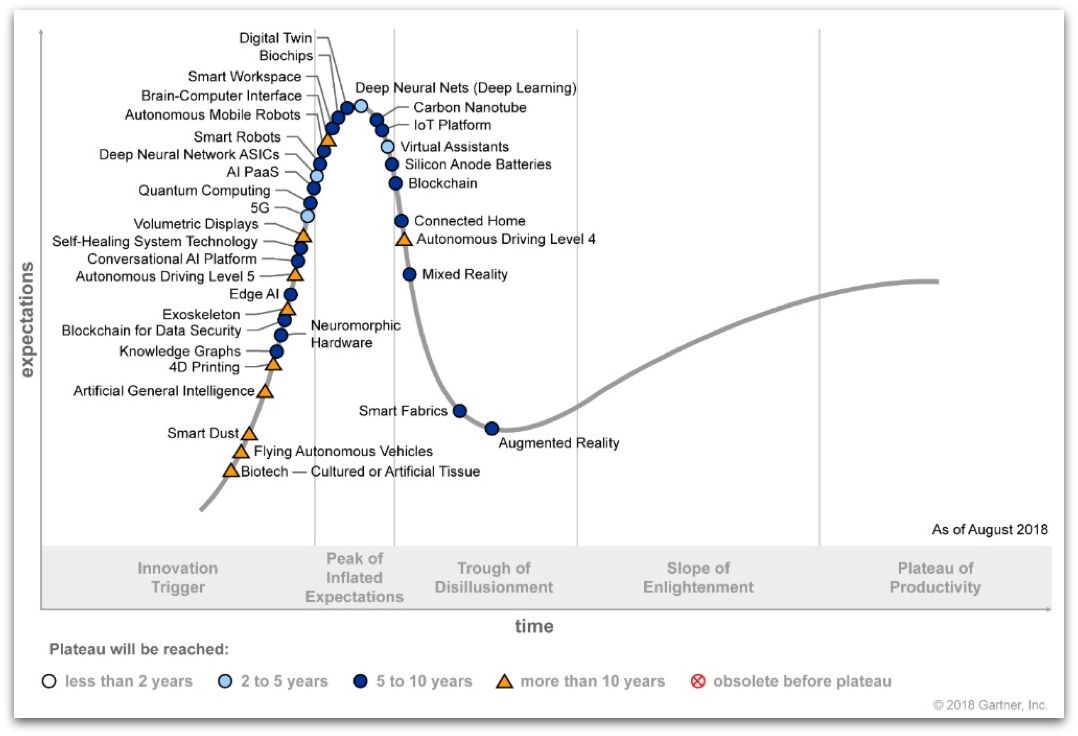 [Note that ‘Smart Workspace’ is almost at the ‘Peak of Inflated Expectations’ whle other technologies, often mentioned in PropTech conversations, still have a way to go.]

Returning to Remit’s article and their assertion that there is "little correlation between the number of times Blockchain gets mentioned at PropTech events and the number of people who actually know what it means”, Blockchain was certainly well mentioned at the Real Estate Innovation Forum at Expo Real in Munich, which took place early in October.

One of the best-attended conference sessions organised by Real Estate Innovation Forum over the three days was “Blockchain and the Real Estate Life Cycle” delivered by Achim Jedelsky, President of FIBREE (Foundation for International Blockchain and Real Estate Expertise).

It was standing room only for the session and, with lots of confused faces in the audience, I was wondering if this was, right in front of me, 'Peak PropTech'?! Then, right at the end of his presentation, Jedelsky said something that cut through the hype.

It may have been missed by those who had switched off and were now focused on their mobile phones, but he hit the nail squarely on the head.

What he was saying is that we should focus on the solution and the outcome rather than being hung up on the technology it uses. In terms of PR, marketing and communications, we need to remember to promote and publicise what something does rather than bragging about what's under the bonnet.

In short - sell the sizzle and not the sausage.